Banjo Number One. Another view of my first banjo in process. Note the sections and joints making up the ring. Based on notes and drawings from Fox Fire Books . Foxfire continues to be a fresh, exciting experience for all of us because of the basic generosity and good will that run strong and deep within most people. This project was to build my own 5 string banjo on as low a budget as of the Fox Fire books and they have a wonderful section on making your own banjo.

One of these days I’ll build the banjo. Solo, traditionally, these banjos are pretty flat, with no neck angle Here’s are photos of my “spare” and of one of Stanley’s letters regarding the project: It was only mentioned under the designs of Dave Pickett. I’ve toyed with the idea of building one and have heard this source before. I’ll try to post pictures sometime but it will be later. You normally won’t be tuning it up to standard pitch with standard violin pegs, so there isn’t much tension on the neck anyhow. I have a buddy that is handier than me and I figure we can work on it together.

Drilled holes for pegs and a neck was born. While I’m sure your Mr. Small, light weight, sturdy, and peaceful enough for hotel neighbors. Thanks for allowing fofire download. I am inspired anew. How thin do you think you could go for a neck without reinforcement? These will be 11″, and I’ll make the inner pot 10″, probably out of poplar, giving it a half inch inset. Well done plan, Rudy.

Glued and clamped them together face to face. 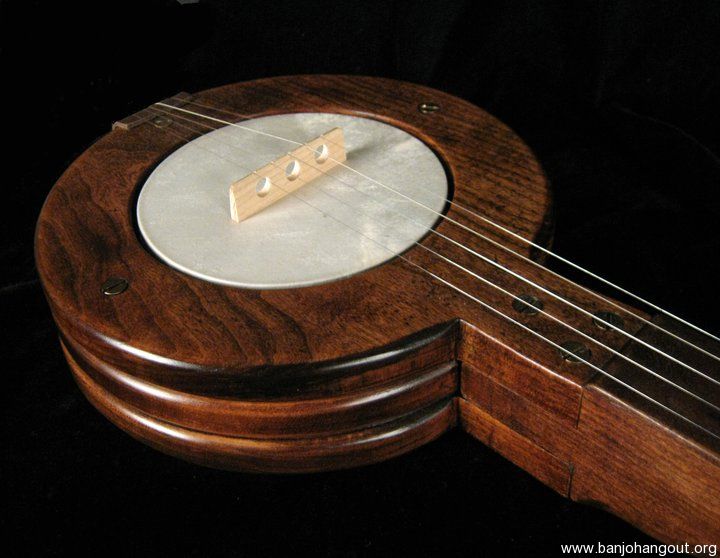 The Banjo plans in “Foxfire 3” are great. I just ordered Foxfire 3 at Amazon. The first was black walnut, from a tree that fell down in my mother’s yard. I’ts been cold and snowed in for a while. Mike, I believe that “cake tin” banjo that inspired you was made by Stanley Hicks who made my mountain banjos.

Originally posted by niko penttinen The second one I made a walnut pot, and a maple neck. Course I would’ve given my eye teeth to live in the “good ole days” Join the Players Union!

And NO I wasn’t doing drugs in the 60’s. It has a teeny bit more treble sound. Stanley’s plans are those printed in Foxfire 3.

Originally posted by MountainBanjo Thats interesting how the rear plate has a smaller opening than the head It’s one of those beacons of light shining on the web, and I have it marked as a favorite. The plans show how to build a fretted as well as a fretless model.

David Pickett’s maple block rim is featured. Join the Players Union! I would love to make a banjo some day Hatfield Custom Buckcreek’ 1 hr. Umm, you mean like, anybody with 0ver 20, posts should be getting a message[i] from the number itself? This is a custom made banjo inspired fooxfire the mountain banjos of Foxfire 3.

Solo, I angle my neck heel. Rudy’s plan is top notch, and his site is a wealth of information on instrument building with fairly simple tools. My pot and back will be done the same.

Want to hide these Google ads?

I made mine about the same size. How I made my neck, for those afraid they cant do this: If you’re specifically interested in the mountain banjo construction stuff you may be interested in my Proffitt-style banjo making information here: I was inspired by the Foxfire books as well.

Originally posted by Jim D Foxfire A whole bunch of middle class doxfire kids started dreaming about heating with wood, raising their own vegetables, trying herbal remedies, making some banio their own cloths, and even brewing their own beer. I have most of the Foxfire collection boxed in the attic.